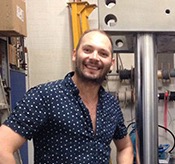 Dr Tom Mitchell (UCL) gives this year’s Bullerwell Lecture at the European Geosciences Union (EGU) meeting in Vienna at 7 pm on Thursday 12 April, in room 2.15 of the Austria Centre.

We hope to see many people there.

The importance of the damage zone in the faulting and earthquake process is widely recognized, but our understanding of how damage zones are created, what their properties are, and how they feed back into the seismic cycle, is remarkably poorly known. Firstly, damaged rocks have reduced elastic moduli, cohesion and yield strength, which can cause attenuation and potentially non-linear wave propagation effects during ruptures. Secondly, damaged fault rocks are generally more permeable than intact rocks, and hence play a key role in the migration of fluids in and around fault zones over the seismic cycle. Finally, the dynamic generation of damage as the earthquake propagates can itself influence the dynamics of rupture propagation, by increasing the amount of energy dissipation, decreasing the rupture velocity, modifying the size of the earthquake, changing the efficiency of weakening mechanisms such as thermal pressurisation of pore fluids, and even generating seismic waves itself. On top of this, instantaous reductions in crustal seismic velocity following earthquakes has been used to infer dynamic damage, but a growing body of geophysical evidence exists for ‘healing’ processes occurring in the crust following such earthquakes, inferred from time-dependent increases in seismic velocity lasting from days to years. All of these effects imply that a feedback exists between the damage imparted immediately after rupture propagation, at the early stages of fault slip, and the effects of that damage on subsequent ruptures dynamics. As such, investigating the relative contributions of individual ruptures to cumulative off-fault damage is critical to fully understand the earthquake energy budget.
In recent years, much debate has been sparked by the identification of so-called ‘pulverized rocks’ described on various crustal-scale faults, a type of intensely damaged fault rock which has undergone minimal shear strain, and the occurrence of which has been linked to damage induced by transient high strain-rate stress perturbations during earthquake rupture. Damage induced by such transient stresses, whether compressional or tensional, likely constitute heterogeneous modulations of the remote stresses that will impart significant changes on the strength, elastic and fluid flow properties of a fault zone immediately after rupture propagation, at the early stage of fault slip.
In this contribution, I will present high resolution datasets of fault zone co-seismic damage patterns from the micro- to km-scale, on several active and inactive crustal scale fault zones. This damage has been quantified using state of the art damage analysis techniques, from CT scanning at the microscopic scale, to using drones and photogrammetry/structure-from-motion to produce high resolution macroscopic structure, damage and alteration maps both along strike and perpendicular to major active and inactive fault structures. Depth and subsurface extent of this damage is then constrained by gravitmetric surveys, magenetotellurics and seismological techniques. In this context, I will then demonstrate and discuss laboratory and field examples of coseismic mechanisms that induce pulverization through dynamic modulations in stress, acting as energy sinks during earthquakes and the feedbacks on rupture dynamics