Rosetta is a robotic space probe built and launched by the European Space Agency to perform a detailed study of comet 67P/Churyumov–Gerasimenko. It was launched on 2 March 2004 on an Ariane 5 rocket and reached the comet on 6 August 2014. The spacecraft consists of two main elements: the Rosetta space probe orbiter, which features 12 instruments, and the Philae robotic lander, with an additional nine instruments.

As the comet 67P approaches the sun, it will start to heat up – the ice will turn to gas and escape from the comet, a process we currently know little about. The Rosetta orbiter and the Philae lander will observe the behaviour of the comet on its solar approach. 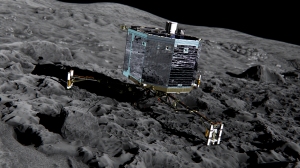 Visualisation of Philae on comet 67P

For the past few weeks, scientists have been studying 67P for viable landing sites for Philae. The final site selection has now taken place and landing is scheduled for the 12th of November. The location, dubbed Site J, on Comet 67P/Churyumov-Gerasimenko, offers the greatest scientific promise and the least risk compared to other places under consideration. 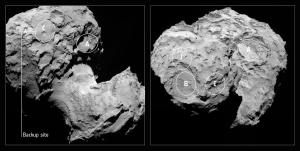 To watch a video about the landing, see below: