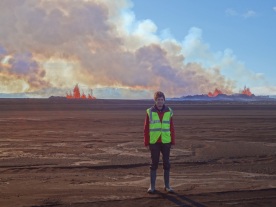 I am a Seismology PhD student with a special interest in volcano-seismology. With my research group we operate a local seismic passive seismic network in the volcanic zones of north and central Iceland. Much of my work involves studying the seismicity we observe in this region. I have worked on micro-seismicity which delineates bookshelf faulting and transform shear between the volcanic rift segments (Green et al NatGeosci 2014), and stress triggered seismicity (Green et al NatGeosci 2015) during the Bárðarbunga-Holuhraun dyke intrusion of August 2014. I am also currently developing velocity models across eastern Iceland covering the entire Vatnajökull icecap region and with excellent resolution covering the Northern Volcanic Zone. I use surface wave dispersion from ambient noise cross correlation and array techniques with teleseismic surface waves to extract group and phase velocities across Iceland. We further hope to jointly invert this surface wave dispersion with crustal receiver functions and body wave travel times to improve our model of the Icelandic crustal velocity structure.

Large earthquakes can generate small changes in static stress: increases that trigger  aftershock swarms, or reductions that create a region of reduced seismicity – a stress shadow. However, seismic waves from large earthquakes also cause transient dynamic  stresses that may trigger seismicity. This makes it difficult to separate the relative  influence of static and dynamic stress changes on aftershocks. Dyke intrusions do not  generate dynamic stresses, so provide an unambiguous test of the stress shadow hypothesis.  Here we use GPS and seismic data to reconstruct the intrusion of an igneous dyke that is  46 km long and 5m wide beneath Bárðarbunga Volcano, central Iceland, in August 2014.  Locations of earthquakes focussed at the leading edge of the dyke map out its northward  segmented propagation in short rapid bursts. Combining this with daily GPS solutions  we construct a time-dependant model of dyke opening. We find (Green et al. NatGeosci  2015) that during dyke emplacement, bursts of seismicity at a distance of 5 to 15 km were  first triggered and then abruptly switched off as the dyke tip propagated away from the  volcano. We calculate the evolving static stress changes during dyke propagation and show  that the stressing rate controls both the triggering and then suppression of earthquake  rates in three separate areas adjacent to the dyke. Our results imply that static stress  changes help control earthquake clustering. Similar small static stress changes may be  important for triggering seismicity near geothermal areas, regions being hydrofractured  and deflating oil and gas fields.

Thoughts on the Conference

I thoroughly enjoyed the conference and recommend it to all PhD students as a great opportunity to meet other researchers from across the country. I had many interesting discussions which have proved very useful in improving my own work, and now have some friendly faces to meet at some of the other larger conferences such as AGU.